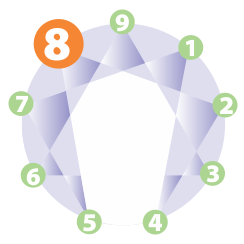 Healthy: Self-assertive, self-confident, and strong: have learned to stand up for what they need and want. A resourceful, "can do" attitude and passionate inner drive. / Decisive, authoritative, and commanding: the natural leader others look up to. Take initiative, make things happen: champion people, provider, protective, and honorable, carrying others with their strength.

At Their Best: Become self-restrained and magnanimous, merciful and forbearing, mastering self through their self-surrender to a higher authority. Courageous, willing to put self in serious jeopardy to achieve their vision and have a lasting influence. May achieve true heroism and historical greatness.

Average: Self-sufficiency, financial independence, and having enough resources are important concerns: become enterprising, pragmatic, "rugged individualists," wheeler-dealers. Risk-taking, hardworking, denying own emotional needs. / Begin to dominate their environment, including others: want to feel that others are behind them, supporting their efforts. Swaggering, boastful, forceful, and expansive: the "boss" whose word is law. Proud, egocentric, want to impose their will and vision on everything, not seeing others as equals or treating them with respect. / Become highly combative and intimidating to get their way: confrontational, belligerent, creating adversarial relationships. Everything a test of wills, and they will not back down. Use threats and reprisals to get obedience from others, to keep others off balance and insecure. However, unjust treatment makes others fear and resent them, possibly also band together against them.

Unhealthy: Defying any attempt to control them, become completely ruthless, dictatorial, "might makes right." The criminal and outlaw, renegade, and con-artist. Hard-hearted, immoral and potentially violent. / Develop delusional ideas about their power, invincibility, and ability to prevail: megalomania, feeling omnipotent, invulnerable. Recklessly over-extending self. / If they get in danger, they may brutally destroy everything that has not conformed to their will rather than surrender to anyone else. Vengeful, barbaric, murderous. Sociopathic tendencies.

Key Motivations: Want to be self-reliant, to prove their strength and resist weakness, to be important in their world, to dominate the environment, and to stay in control of their situation.