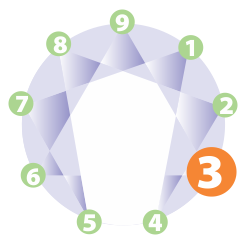 Healthy: Self-assured, energetic, and competent with high self-esteem: they believe in themselves and their own value. Adaptable, desirable, charming, and gracious. / Ambitious to improve themselves, to be "the best they can be" — often become outstanding, a human ideal, embodying widely admired cultural qualities. Highly effective: others are motivated to be like them in some positive way.

At Their Best: Self-accepting, inner-directed, and authentic, everything they seem to be. Modest and charitable, self-deprecatory humor and a fullness of heart emerge. Gentle and benevolent.

Average: Highly concerned with their performance, doing their job well, constantly driving self to achieve goals as if self-worth depends on it. Terrified of failure. Compare self with others in search for status and success. Become careerists, social climbers, invested in exclusivity and being the "best." / Become image-conscious, highly concerned with how they are perceived. Begin to package themselves according to the expectations of others and what they need to do to be successful. Pragmatic and efficient, but also premeditated, losing touch with their own feelings beneath a smooth facade. Problems with intimacy, credibility, and "phoniness" emerge. / Want to impress others with their superiority: constantly promoting themselves, making themselves sound better than they really are. Narcissistic, with grandiose, inflated notions about themselves and their talents. Exhibitionistic and seductive, as if saying "Look at me!" Arrogance and contempt for others is a defense against feeling jealous of others and their success.

Unhealthy: Fearing failure and humiliation, they can be exploitative and opportunistic, covetous of the success of others, and willing to do "whatever it takes" to preserve the illusion of their superiority. / Devious and deceptive so that their mistakes and wrongdoings will not be exposed. Untrustworthy, maliciously betraying or sabotaging people to triumph over them. Delusionally jealous of others / Become vindictive, attempting to ruin others' happiness. Relentless, obsessive about destroying whatever reminds them of their own shortcomings and failures. Psychopathic, murder.

Key Motivations: Want to be affirmed, to distinguish themselves from others, to have attention, to be admired, and to impress others.