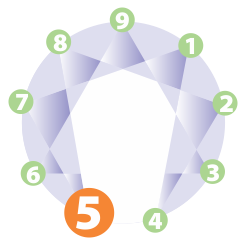 Healthy: Observe everything with extraordinary perceptiveness and insight. Most mentally alert, curious, searching intelligence: nothing escapes their notice. Foresight and prediction. Able to concentrate: become engrossed in what has caught their attention. / Attain skillful mastery of whatever interests them. Excited by knowledge: often become expert in some field. Innovative and inventive, producing extremely valuable, original works. Highly independent, idiosyncratic, and whimsical.

At Their Best: Become visionaries, broadly comprehending the world while penetrating it profoundly. Open-minded, take things in whole, in their true context. Make pioneering discoveries and find entirely new ways of doing and perceiving things.

Average: Begin conceptualizing and fine-tuning everything before acting — working things out in their minds: model building, preparing, practicing, and gathering more resources. Studious, acquiring technique. Become specialized, and often "intellectual," often challenging accepted ways of doing things. / Increasingly detached as they become involved with complicated ideas or imaginary worlds. Become preoccupied with their visions and interpretations rather than reality. Are fascinated by off-beat, esoteric subjects, even those involving dark and disturbing elements. Detached from the practical world, a "disembodied mind," although high-strung and intense. / Begin to take an antagonistic stance toward anything which would interfere with their inner world and personal vision. Become provocative and abrasive, with intentionally extreme and radical views. Cynical and argumentative.

Unhealthy: Become reclusive and isolated from reality, eccentric and nihilistic. Highly unstable and fearful of aggressions: they reject and repulse others and all social attachments. / Get obsessed yet frightened by their threatening ideas, becoming horrified, delirious, and prey to gross distortions and phobias. / Seeking oblivion, they may commit suicide or have a psychotic break with reality. Deranged, explosively self-destructive, with schizophrenic overtones.

Key Motivations: Want to possess knowledge, to understand the environment, to have everything figured out as a way of defending the self from threats from the environment.