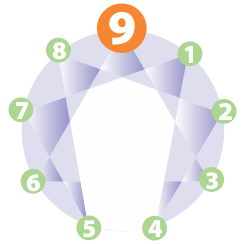 Healthy: Deeply receptive, accepting, unselfconscious, emotionally stable and serene. Trusting of self and others, at ease with self and life, innocent and simple. Patient, unpretentious, good-natured, genuinely nice people. / Optimistic, reassuring, supportive: have a healing and calming influence — harmonizing groups, bringing people together: a good mediator, synthesizer, and communicator.

At Their Best: Become self-possessed, feeling autonomous and fulfilled: have great equanimity and contentment because they are present to themselves. Paradoxically, at one with self, and thus able to form more profound relationships. Intensely alive, fully connected to self and others.

Average: Fear conflicts, so become self-effacing and accommodating, idealizing others and "going along" with their wishes, saying "yes" to things they do not really want to do. Fall into conventional roles and expectations. Use philosophies and stock sayings to deflect others./ Active, but disengaged, unreflective, and inattentive. Do not want to be affected, so become unresponsive and complacent, walking away from problems, and "sweeping them under the rug." Thinking becomes hazy and ruminative, mostly comforting fantasies, as they begin to "tune out" reality, becoming oblivious. Emotionally indolent, unwillingness to exert self or to focus on problems: indifference. / Begin to minimize problems, to appease others and to have "peace at any price." Stubborn, fatalistic, and resigned, as if nothing could be done to change anything. Into wishful thinking, and magical solutions. Others frustrated and angry by their procrastination and unresponsiveness.

Unhealthy: Can be highly repressed, undeveloped, and ineffectual. Feel incapable of facing problems: become obstinate, dissociating self from all conflicts. Neglectful and dangerous to others. / Wanting to block out of awareness anything that could affect, them, they dissociate so much that they eventually cannot function: numb, depersonalized. / They finally become severely disoriented and catatonic, abandoning themselves, turning into shattered shells. Multiple personalities possible.

Key Motivations: Want to create harmony in their environment, to avoid conflicts and tension, to preserve things as they are, to resist whatever would upset or disturb them.