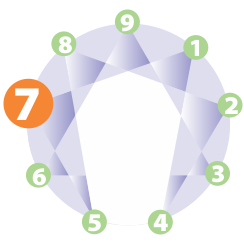 At Their Best: Assimilate experiences in depth, making them deeply grateful and appreciative for what they have. Become awed by the simple wonders of life: joyous and ecstatic. Intimations of spiritual reality, of the boundless goodness of life.

Average: As restlessness increases, want to have more options and choices available to them. Become adventurous and "worldly wise," but less focused, constantly seeking new things and experiences: the sophisticate, connoisseur, and consumer. Money, variety, keeping up with the latest trends important. / Unable to discriminate what they really need, become hyperactive, unable to say "no" to themselves, throwing self into constant activity. Uninhibited, doing and saying whatever comes to mind: storytelling, flamboyant exaggerations, witty wise-cracking, performing. Fear being bored: in perpetual motion, but do too many things — many ideas but little follow through. / Get into conspicuous consumption and all forms of excess. Self-centered, materialistic, and greedy, never feeling that they have enough. Demanding and pushy, yet unsatisfied and jaded. Addictive, hardened, and insensitive.

Unhealthy: Desperate to quell their anxieties, can be impulsive and infantile: do not know when to stop. Addictions and excess take their toll: debauched, depraved, dissipated escapists, offensive and abusive. / In flight from self, acting out impulses rather than dealing with anxiety or frustrations: go out of control, into erratic mood swings, and compulsive actions (manias). / Finally, their energy and health is completely spent: become claustrophobic and panic-stricken. Often give up on themselves and life: deep depression and despair, self-destructive overdoses, impulsive suicide.

Key Motivations: Want to maintain their freedom and happiness, to avoid missing out on worthwhile experiences, to keep themselves excited and occupied, to avoid and discharge pain.